Outsect’s masquerading as butterflies. They recognize that they are not as pretty, hence the term “Margerineflies.” 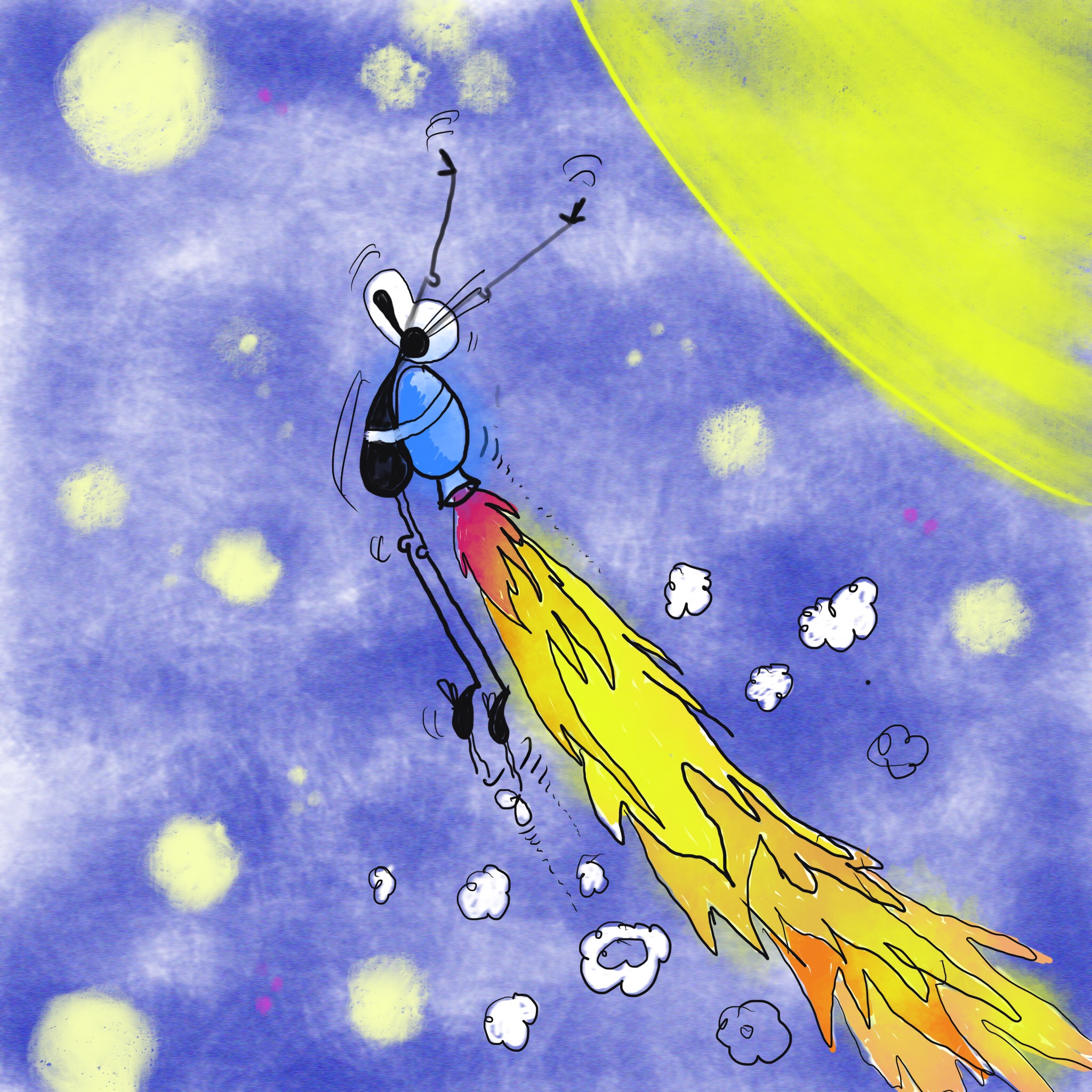 Optimistic Outsect Reaches for the Stars
Subtitled: Don’t ask what happens next…

I have just traded in my old iPad 2 at Best Buy and received a coupon for $100 towards a new Apple purchase. I took my voucher across the store and invested in the new iPad Pro 9.7. I also purchased the Apple ‘pencil’ and went home to play. I downloaded Procreate and  started to doodle a bit before switching to a little Outsect action. I was flabbergasted to discover that the app had actually recorded my drawing. So, hit the play button to see Outsects come to life!

As you know flying on broomsticks is as old as twigs. For centuries, broomsticks have been flown in the classical style. This old-fashioned approach involves sitting astride the broom handle (notoriously uncomfortable!) Outsects have quietly brought broomstick riding back to prominence by adopting skateboarding techniques. They stand on the broom handles and achieve scary heights and astonishing speeds. (Worry-warts would probably suggest one should wear a parachute when skate-brooming, just saying.)

Motorized hobby horse racing is a popular sport amongst Outsects. The hobby horses are propelled by small engines, e.g. a lawn mower, weed wacker or moped engine will work. Law dictates that riders must wear helmets and the current trend in helmet design is inspired by Medieval Knights.

I recently downloaded a trial version of ToonBoom Harmony an animation program and set to work on animating Outsects. I drew the Outsects in black on a white background and added colored butterflies. When my masterpiece was complete, I exported the animation into a format that I could share with the world. It was converted to a Quicktime movie, and I was very pleased with myself until I viewed the final product. For some reason, the animation saved with a black background. As a result, you can’t see all the work I did on my Outsects! This is my very first attempt at animating Outsects (or anything else for that matter). You will just have to trust me when I say I had 102 Outsects running around waving butterfly nets!

Outsects tip their fiddles and synchronize surfboards to pay homage to Katsushika Hokusai and his woodblock print “The Great Wave off Kanagawa”.

Notes: This picture started out as a light pencil drawing followed by watercolor paint, and the lines were then picked out using pen and ink. In the original I painted the sky as an afterthought and promptly regretted the decision and put the picture out of sight. Recently, I retrieved the image and decided I still liked the idea of surfing fiddlers and opted to scan it. Once I had “the Surfing Fiddlers” in my computer, I removed the sky using Affinity Photo (an excellent alternative to Photoshop owned by the avaricious Adobe Company). Next, the surfboards were tweaked (in the original these were all a muddy flat orange). Using the “Flood Select Tool”, Affinity’s alternative to Photoshop’s “Magic Wand”, I removed the watercolor paint from the surfboards and then recolored them using the “Gradient Tool”. These changes helped to give a more 3D look to the surfboards, and now they look as though they are shiny and as we all know “shiny” things move fast.

Getting Things Done: The Art of Stress-Free Productivity by David Allen inspired this picture. Getting Things Done (GTD) is something I strive for yet I remain a consistent underachiever in its fine arts. Hence the OGTD version: Outsects Getting Things Done. In OGTD, the practitioner leaves everything to the last minute, this focuses the mind while allowing inspiration to slowly simmer and bubble. In OGTD, undisciplined thoughts are given free rein; they wander down winding unproductive paths and permit the intrusion of innumerable frivolities and distractions. Once the alarm finally sounds the OGTD practitioner snaps to attention, gathers up their wool-gathering and lint collecting and applies their well-rested concentration to the task at hand.

A Chattering of Outsects (otherwise known as an airborne Outsect Party).

Outsect Jet Pods are loosely based upon the Space Hopper. Unlike the Space Hopper, the Outsect version uses a small jet engine and shoots upwards. It is very likely that you have seen a partying group of Outsects on Jet Pods and assumed you were observing a flock of noisy birds. The Outsects use the collective term “Chattering” for any such airborne party.

The term is borrowed from feathery Chough parties “A group of choughs may be referred to fancifully or jocularly as a chattering or clattering.”